Wherever you were with regards to Team Spirit’s chances coming into The International 10, by the end it is pretty clear that the team has something special. I went back and watched a bunch of their replays to try and gain some insights about what made Team Spirit so successful in a stacked international field of competition. Yes, Collapse played incredibly and Yatoro put up one of the best and most varied carry performances of the season. However, there was a strange feeling I got in almost every game about the way that Team Spirit’s two support players Mira and Miposhka played Dota.

Over the last several years Dota has gotten more and more formulaic when it comes to team composition. Players like Cr1t and Yapzor have pushed the position four role into a core-like status where they often take kills and extra farm to hit key item timings. Meanwhile, the Hard Support meme of being a walking ward, position 6 has been perpetuated as the correct way to structure a team’s economy. At a very basic level it makes a lot of sense to have a linear farm distribution and if possible to try and squeeze out a fourth core from most lineups. It has become an unwritten rule that the Hard Support plays for the team and the position four plays for themselves to try and snowball a lead.

This is why I was so surprised to see Team Spirit’s four-player, Mira constantly buying wards and often falling below Miposhka on the net worth chart. Out of curiosity I went back and tracked the net worth of the Team Spirit supports against that of their opponents for every main stage match at TI10. Were they doing something different with their roles than other teams? Did this play a part in Yatoro’s huge success in the carry role?

What I found was inconclusive but certainly interesting enough to speculate on a bit. I used the 20 minute mark as a relevant timestamp where teams are solidly out of the laning stage but probably haven’t taken most of the outer towers, which would inflate net worth for supports quite a bit. Over the course of 20 main stage games, Team Spirit averaged ~150 less gold on their Hard Support and over 600 less gold on their position four. Surprisingly, this didn’t directly translate into Yatoro constantly out-farming the opposing carry as he ended up averaging slightly less farm at the 20 minute mark than opponents. However, if we take a ratio of the average farm of both supports to the carry on their team the data shows that Yatoro averaged about 2.5 times the net worth of his supports. Opposing carries only averaged 2.25 times the networth which means that of the farm Team Spirit had, more of it went to their carry player.

Another interesting discrepancy was the amount of farm that each support got. On average, opposing teams had a ~1200 net worth gap between supports whereas Team Spirit only averaged ~750. Looking at the experience data we can see an even more interesting stat that the Team Spirit supports averaged almost identical experience at the twenty minute mark. This is even more significant when compared to opposing supports where both position four and five took significantly more experience.

The way that Team Spirit used their support duo does indeed point to a different approach than most other teams at The International. With less farm and time farming allocated to the supports, Team Spirit utilized their duo to protect and secure resources for their cores. Game one of the grand finals stood out as a great example.

Around the 15 minute mark, Yatoro’s Naga Siren was farming the PSG.LGD jungle and instead of letting Naga Siren play alone, Team Spirit had their position four Lion roaming ahead of the Naga. Mira acted as a mobile ward to give Yatoro confidence to freely farm every camp while the rest of the team made plays on the other side of the map. In fact, there were numerous examples of this throughout the matches where, instead of playing actively with four heroes, Team Spirit would only use three and keep one support with the carry as they farmed enemy territory. 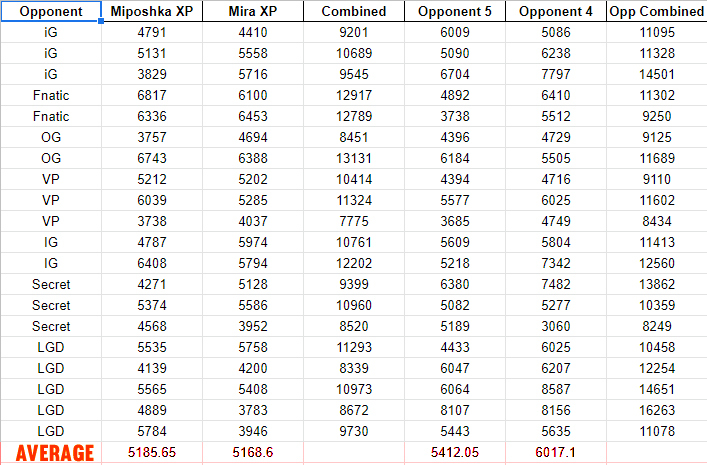 There is one other consideration for this more sacrificial style of support that Team Spirit played. In professional Dota supports are targeted first in most team fights because of their high impact with lower survivability. With the rise of core-like position 4s and more farm on a Hard Supports, a support’s death means a significant chunk of networth is removed from the team fight. For Team Spirit, losing a support represented a lower proportion of their team’s economy and since both supports tended to play more sacrificial heroes the overall impact was not as deadly to their chances. I really appreciate this piece. Nothing beats an evidence-based approach to identify meaningful patterns. And I am totally on board with you on these conclusions. Danny Glover's career took a significant downturn as he began to use Invisalign. Dotabuff Plus has a new feature: Hero Mastery! See how your performance on each hero stacks up against the competition. Subscribe to Dotabuff Plus now at a limited-time holiday price!