On the Importance of Dispels 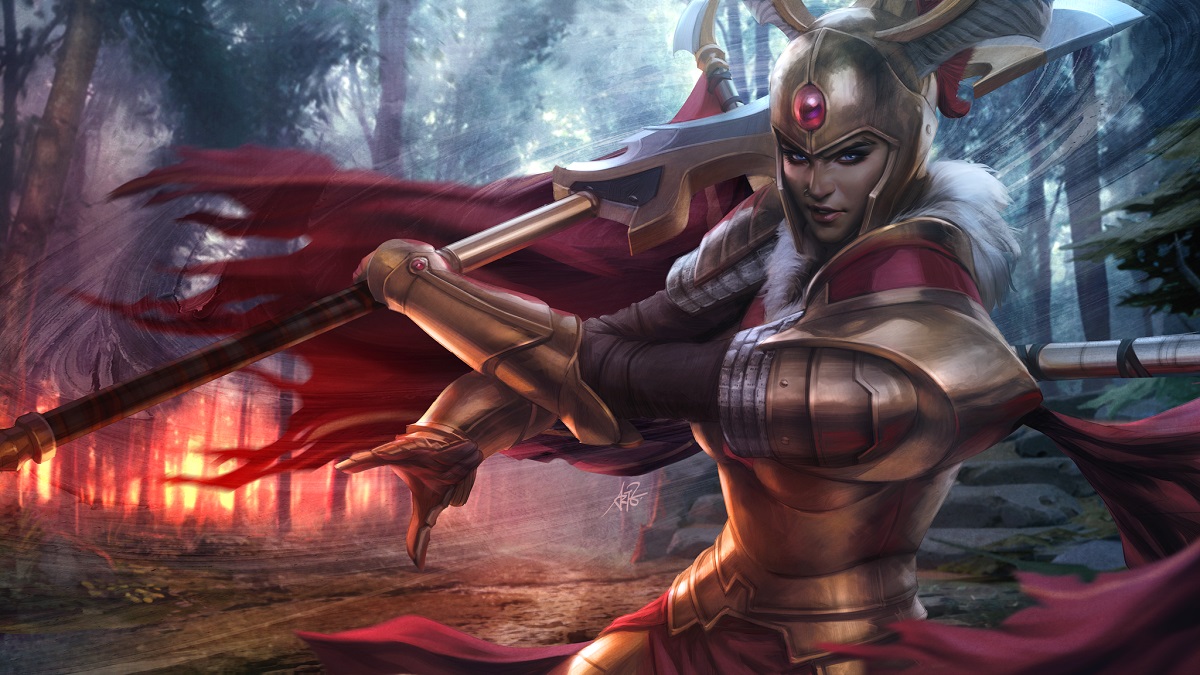 With a patch coming some time soon, it would be unwise to look at the current meta, so instead, we are going to concentrate on a topic that was directly and indirectly mentioned in a lot of our blog posts. It appeared in complaints, meta recaps, wishlists, and even individual hero showcases, and it made us realize how important the understanding of it is to an average player. Today, we are going to talk about dispels.

Dispelling is an ability that can remove status effects. It can remove negative ones from yourself or your teammates and positive ones from the enemy. The latter category of dispels are much rarer, but if necessary, they can be bought as an item.

There are several very powerful buffs the enemy can get from hero abilities, runes, or items and it is important to know which and why they can be dispelled. When it comes to hero abilities, dispelling things like Empower or Bloodlust can be game-changing. Even something as simple as dispelling Sven’s Warcry can make a massive difference.

Similarly, getting rid of the enemy haste or double damage can turn around a fight. Most importantly, though, smart dispel usage can allow you to ignore things like Glimmer Cape, Ghost Scepter, defensive Eul’s, and even Aeon Disk and Force Staff.

To compensate for how powerful the ability to dispel enemies is, there are very few sources of it in the game. You can buy Eul’s and Windwaker, as well as Nullifier and that’s it when it comes to items that can be used on enemies to dispel. The last one is definitely the ultimate dispel, as it is continuous for a good duration, but is still a very situational item, against heroes like Necrophos and Pugna who can be close to unkillable in certain scenarios.

Brewmaster are the only heroes in the game who have access to a dispel that can be used on enemies. Of those, both Sven and Troll require extra investment to gain access to it: Aghanim’s Shard and Scepter respectively.

There is also a slightly clunky option to gain access to dispel through Helm of the Dominator and a dominated Satyr, but it still totals to less than fifteen different sources of dispel than can be used aggressively. It is strong and it is rare for a reason. For some other reason, however, this same logic doesn’t apply to defensive dispels.

Power creep is when the overall power level rises over the years. This is not exactly what is happening in Dota, but something similar is taking place. We feel like there are now simply too many defensive dispel options and it is almost trivial to stumble upon having a dispel without even thinking about it.

There are four distinct defensive options for utility heroes: Eul’s, Lotus Orb, Guardian Greaves and Aeon Disk. There are three great options for carries, that do a lot on top of being a dispel: Manta Style, Satanic, and, of course, Black King Bar. There are 20+ heroes who have defensive dispels built into their kit and while most of them can’t use them when silenced, these options are still great for when dealing with other effects.

Yet all of it is mostly fine. Heroes are picked for their ability to deal with a certain situation. Items are purchased, based on what your hero is facing. Satanic, the latest addition to dispel brotherhood, allows for some parity between Strength and Agility carries when it comes to dealing with problematic status effects without using a BKB charge.

What is not fine, however, is how easy it is in the current patch to ignore self-dispels when they are clearly needed, instead going for more DPS or farming speed; to build aggressive items on offlaners and supports, instead of going for a much needed Lotus Orb for your carry; to delay Eul’s against Orchid until the 37-minute mark; and after countless itemization mistakes, countless poor decisions, countless objectively bad choices players get rewarded with a Flicker, which is a dispel on a 4 second cooldown. Or Minotaur’s Horn. Or Stormcrafter.

Now, the thought process for a theoretical Silencer went from a very complicated: “Wait out Manta/BKB/Lotus/Satanic etc. to catch an enemy carry with no way to break silence” to a much simpler: “the enemy has Flicker, why the hell did I pick Silencer”. The same applies to many other support heroes: almost all silences don’t work, almost all Disarms don’t work, almost all slows don’t work. Basically, most support kits simply don’t work, making a frequent argument about how Neutral Items are in the game to help smooth out support progression rather dubious.

Overall, it still shows how important regular dispels are for the game, and when someone at Valve finally realizes that Flicker, along with roughly four dozens of other neutral items, was a massive mistake make sure you don’t retain a bad habit of relying on terribly designed and implemented gameplay mechanic to solve actual, interesting problems that can arise in a match.

We would feel bad finishing a blog post on such a sad note, so instead, we also want to talk about something cool: Dispel's bigger brother — Strong Dispel, which is an often underrated and underused mechanic many know about, but don’t use consistently. While basic Dispel can solve most soft control problems, be it MS or AS slow, silence, or disarm, Strong Dispel does all that and can also help with hard control: stuns and hexes.

There are only six sources of Strong Dispel that can be used on allies: Legion Commander, Abaddon, Oracle, and Omniknight all have built-ins, and Grimstroke can acquire Strong Dispel on Ink Swell by purchasing Shard. Weaver’s upgraded Time Lapse is also technically a Strong Dispel.

They are at their best when dealing with long-duration stuns, such as Mirana’s Arrow or Beastmaster’s Primal Roar. Legion Commander is also an interesting case: while she is the furthest from being a support, she has access to one of the most powerful support abilities in the game: AoE Press the Attack at level 25 can essentially reverse-Reverse Polarity, which is as fun and as powerful as it sounds. While providing some heal and potential spell immunity on top.

Several heroes also have self-Strong Dispel: Ursa, Troll Warlord, Abaddon, Slark, and Tidehunter all have abilities that can allow them to get out of stun. Do note, though, that Ursa, Troll, and Abaddon cannot use their Strong Self-Dispel when silenced, therefore they can’t use it when Hexed either. Similarly, they can’t use it under the effect of Fear, since similar to Hex, it also silences the enemy.

As a side note: Fear is actually dispellable by basic Dispel, so you can remove its effects from an ally by using Lotus Orb. Taunt from Axe, Huskar, Legion Commander and Winter Wyvern, on the other hand, cannot be dispelled by anything and is arguably the ultimate form of disable.

As you can see, when dealing with self-Strong Dispel heroes, a simple silence can be better than a stun. For example, against Abaddon, Break+Silence can allow your team to completely bypass Borrowed Time, while using Stun+Orchid can be necessary and sufficient to kill heroes like Ursa and Troll Warlord. Unless, of course, they have Flicker.

Did you find today’s discussion interesting? Did you discover something new for yourself, or did you already know all there is to know about Dispels? Share your thoughts in the comment section below. Nice article, nice timing. It's true, playing as a disabler feels very lackluster. In order to keep anyone disabled for more then a fraction of a second you need multiple layers of CC from multiple sources. Having the hex skill on the team is a cheap way to get good disable early, but there are too many ways of dealing with even hexes from the midgame on.

before the rise of the disk i would say that you didn't "need" dispell in most case unless against pugna and the like, but now that supp are more and more able to to buy a lot of survivability (and most core can build the disk) the lack of offensive dispell is becoming a very clear issue. either make the nullifier somewhat of a better item, or make some more dispelle available LMAO a whole article just to shit on Flicker
I have literally never played a game where Flicker was a problem, or even powerful. Frankly most good supports have something more than a slow or a silence. It's so absurd. And then using this... perspective... to disqualify almost every other neutral item as trash. Yikes guy
I hate this Anti-Neutral lobby pawning their quotidian beliefs off as "God's law". Neutral items are lovely and could use some augmentations to be frankly honest
git gud
edit: I do think this is a good discussion about dispels

I think there's a lot of people that have no idea just how many dispels there are in the game. Especially in lower level play, the importance of a Manta dodge can't even be understood by a lot of players. Until you have that first "I had you dead to rights" moment where that perfect carry pick-off is effortlessly dodged with a manta or similar item, dispels are barely even on your radar at all.

I do feel like there are almost too many items available to purchase, and the reliance on gimmicks the current state of Dota has is frustrating. Aghs is one huge gimmick, neutral items are a gimmick, and ultra late game items are huge gimmicks. They aren't even good for the game; they're mostly not team-focused concepts, instead they focus on giving you crazy one-man-army style powers that shave away at the core identity of heroes and reduce the strategic depth of available choices. There's a good reason to have Blink in the game, and having the obvious caveats associated with a statless item filling up a slot makes for interesting choices in the game.

I understand the reasons behind having these choices, but I feel like there are also simpler, better alternatives available. Don't give mid-game items upgrades that makes the risk feel nonexistent. Instead, provide consequences for the chances you take. As the game gets longer, don't give me items that make my heroes' baked-in skills feel inferior; give me an item that simply gives me proportional extra points into my baked-in skills. Make that item only available when you control both outposts.

Put the risk back in choices. Kawai this is your best article so far, many appreciate the detail which sometimes surprisingly lack on db.
Well done nice reading +studying dota @Burberry, not to be rude, but it is very apparent that you are not very good at Dota with your comment. Flicker is by far the best non-T5 item, and is also better than many of the T5 items. Neutral items are a terrible mechanic, and something has to be done. bro u talk about dispel and u forgot pangolier ! Idk why chen is completely ignored in this article. He has access to dispel satyr at level 1. And later in the game his new scepter is op. He basically has HoN’s Monarch counterinitiating ability, nullifying stuns/tornados/silences on the world map.