We Got Our Rematch — Day 2 Recap 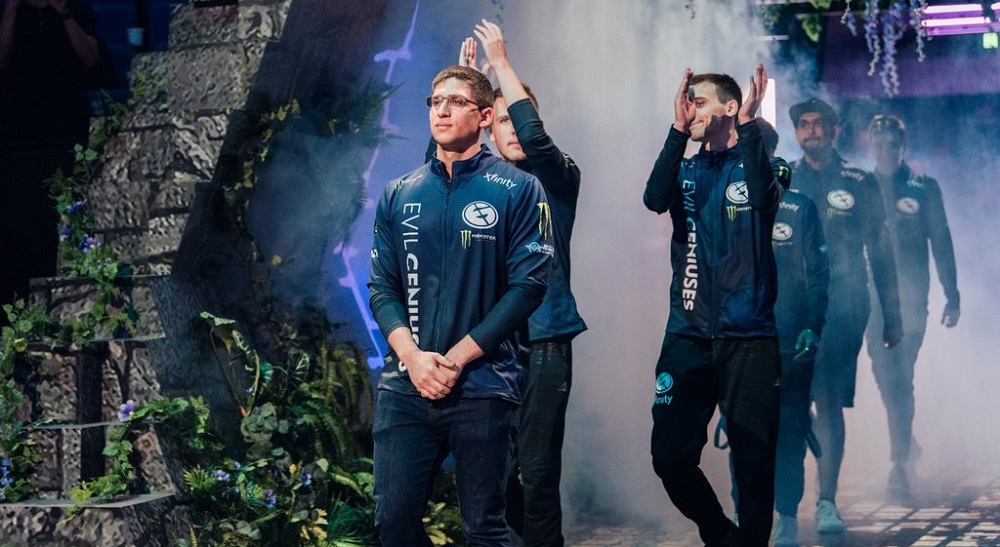 Two more teams have been eliminated and two more teams now find themselves in the lower bracket. Second day of the tournament was filled with intense games and heartbreaking losses, but most importantly, it set up the stage for an OG vs. EG Rematch.

Evil Geniuses are going to meet OG in the upper bracket tomorrow and it is a big question whether OG will be able to show the same convincing performance. EG have been gaining a lot of momentum, fighting tooth and nail for every victory, while OG have been doing, well, this:

Last year it was OG who were angry. They were the team that was left without a captain two months before The International. They were the team that had to scrounge for players, go through the open qualifiers, regional qualifiers and then make their historic run through the upper bracket to the champion title. OG was betrayed, but they had their revenge.

They don't look angry this year. They look confident, they act goofy and they are having fun while winning. EG on the other hand. EG looks hungry. They need to prove that the broken friendship was worth it. They have their chance after an impressive series against Team Secret and we will get to see what they are going to do with it.

Virtus.Pro have been eliminated from the International 2019 by a quick one-two punch from the Chinese teams. Both PSG.LGD and Royal Never Give Up didn't give the DPC powerhouse any chances, confidently winning 2:0 in their respective series.

In their last match Virtus.Pro went for the CIS specialty, going all-out with aggression, pressure and tempo, but there is a reason the Chinese Dota teams are known for their perseverance. Amazing draft from RNG allowed them to survive on slivers of HP and make a cut after cut, slowly, but surely bringing VP down.

There are no more CIS teams in the International and RNG look like they've only started to warm up. They will face Team Liquid in an elimination match.

No matter how you feel about TNC Predator, you have to admit—they play amazing Dota and they always make it look fun. Or, more accurately, played amazing Dota, since they were eliminated from The International 2019.

The game was not only a clash of two world-class teams, it was a clash of playstyles. TNC Predator were playing good aggressive Dota, they made smart rotations and were adamant about closing the game. But Liquid is finally back. The gods of strategy and macro showed that they came prepared: creating space, safely pushing in waves and making sure that the TNC Timings never came to fruition.

It was a different kind of beautiful: subtle and quiet, yet absolutely undeniable. There were no massive fights until the very end, but when Liquid did strike they did it with the precision and ferocity that team is known for. Clean, surgical, deadly.

It was possible on the back of some godly plays from the support duo of Team Liquid and after this series Liquid finally looks like a squad that can make a long run through the lower bracket. Unless awoken LaNm stops them.

The moment I said these will get easier, they got so much harder. We have EG that look strong and OG that look strong, but... weird? We have LGD vs. Vici Gaming, who are matched somewhat evenly. We have the fifth best mid scorer in CCnC playing against Infamous and it is yet another match that is impossible to bet on. Finally, we have Secret vs. Mineski, where Secret are still favorites, but MidOne is such a terrible fantasy scorer...

I think I will simply go with Sumail and his best average. I still think EG will put up a fight and might even win the series. And Sumail scores well even in games he loses anyways.

If you really believe in the power of friendship and think EG will lose the series in a spectacular fashion, go with Somnus/Maybe who is the second best pick.

Nisha is going to be our safe, boring pick. We failed with Ramzes today, but Secret did look a lot more convincing during the group stage and looked overall decent in the series against EG. It's just that EG looked really, really, really hungry.

We prefer to have one safe and one "risky" pick in our fantasy lineups, and we will bet on PSG.LGD in their series against Vici Gaming. Ame is in the middle of the pack in terms of fantasy scoring and is no match for Paparazi, but we expect the latter to lose and cores generally don't do well in losing games. If you think Vici Gaming are going to win, definitely go with big Papa on this one, since he is the top scorer.

Moreover, it might look like Infamous aren't going to make it further and Newbee will put a stop on their Cinderella story, but I don't buy it. These guys are just the right kind of crazy and relentless to actually make it work. So despite great averages, it is hard to consider Yawar as one of the options. He is a bit too risky even for our risky spot.

At least this one is easy. Dy and Fly: position five supports, so they don't care about the match outcome, top scorers, will probably have tough, long series etc. etc. etc. We have enough volatility with cores and mids as it is, so these two should round up the roster pretty well.

And wow I picked VP to win it all...I thought they would be able to turn it on this tournament but I guess not.